Bubble Blast is an electronic game for two players. Each player remotely controls a little vehicle, which has an inflated balloon attached to its back and a sharp needle attached to its front. The aim of the game is to pop the opponent’s balloon while keeping one’s own balloon intact. It is an open source project and at the end of this page, you can find links to all codes, schematics and 3D files.

Bubble Blast at the courtyard of the Abdellia Palace in Tunis

In 2017, Kati and I‘ve been invited to Tunis for a residency and workshop with students from Tunisia, France and Germany. It was the 22nd edition of Eniarof, which is about building artistic DIY amusement attractions. In fact, if you read “eniarof” backwards, you might notice that it is French for “showman”. Here's a video about the whole event. And here's a link to Kati's project “Seduce the Train”, which she also made in Tunis.

The international Eniarof-team in Tunis

We worked at the beautiful Abdellia Palace, where we also presented our attractions to the public. Surrounding a central courtyard, the palace has a lot of rooms in different shapes and sizes, which were perfect for being transformed into an amusement arcade. When entering the palace, the large courtyard is the first thing that visitors see. Therefore, we also wanted to place an attraction on the yard. I came up with the concept for Bubble Blast, as I thought that the open area would make a perfect arena for a game with remote controlled cars. The idea for the gameplay was heavily inspired by this YouTube video of two Roombas, with a knife installed on their fronts and balloons on their backs, fighting against each other. Later, I learned that there exists also a similar level in Mario Kart. Maybe the Roomba-video was inspired by the Nintendo game in the first place?

Working on Bubble Blast at the Abdellia Palace in Tunis

The first version of the game was based on the two cheapest remote controlled toy cars that I could find in the toy shops of Tunis and that worked on different radio frequencies. I started to modify the cars by removing everything unessential in order to make them less heavy. Then, I redesigned the vehicle by attaching a round, lightweight plastic sheet to it, as well as bumpers made of corrugated conduit. Bent welding rods served as balloon mounts and arrays of sewing pins were attached to the front of the vehicles as weapons. In order to make the vehicles rechargeable, I used power banks instead of the normal batteries.

A first version vehicle based on a remote controlled toy car 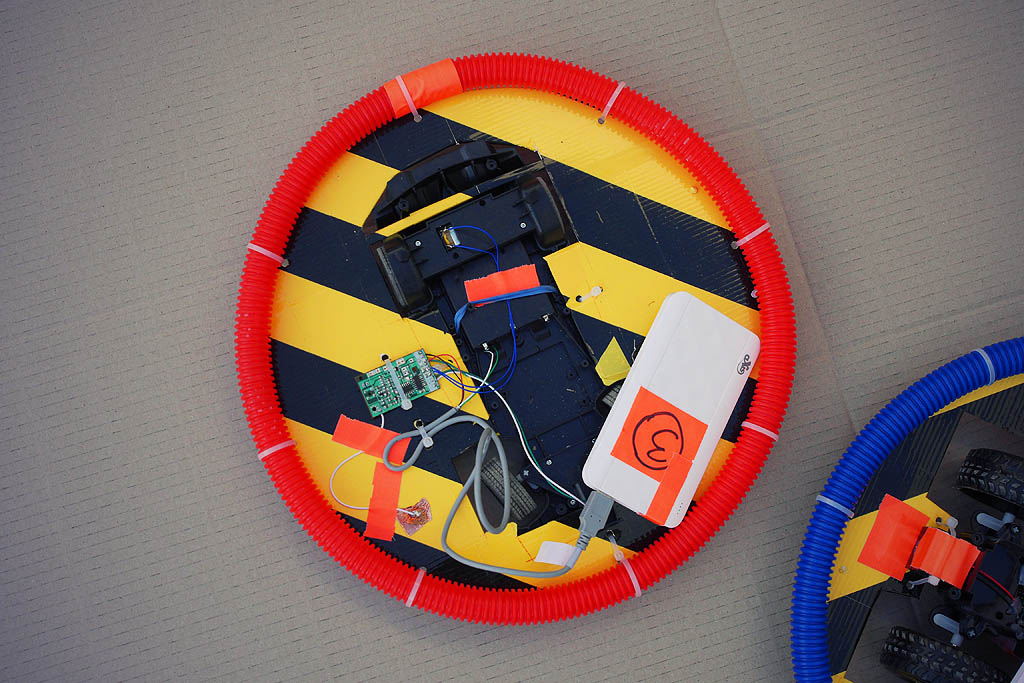 For building the game controllers, I disassembled the cars’ remote control units and took out the circuit boards. They had four switches for left, right, forward and backward movements. I connected two arcade joysticks to the two different circuit boards and built cardboard enclosures, decorated with barking tape. This was straightforward and worked relatively well from a technical perspective. But when the audience was playing the game, I realized that quite many people had problems with the steering: they often pushed the joystick just left or right and wondered why the cars did not react. Steering alone does not move a remote controlled car – one has to also drive forward or backwards at the same time. So I had to give little bit advise to the visitors on how to steer the vehicles. 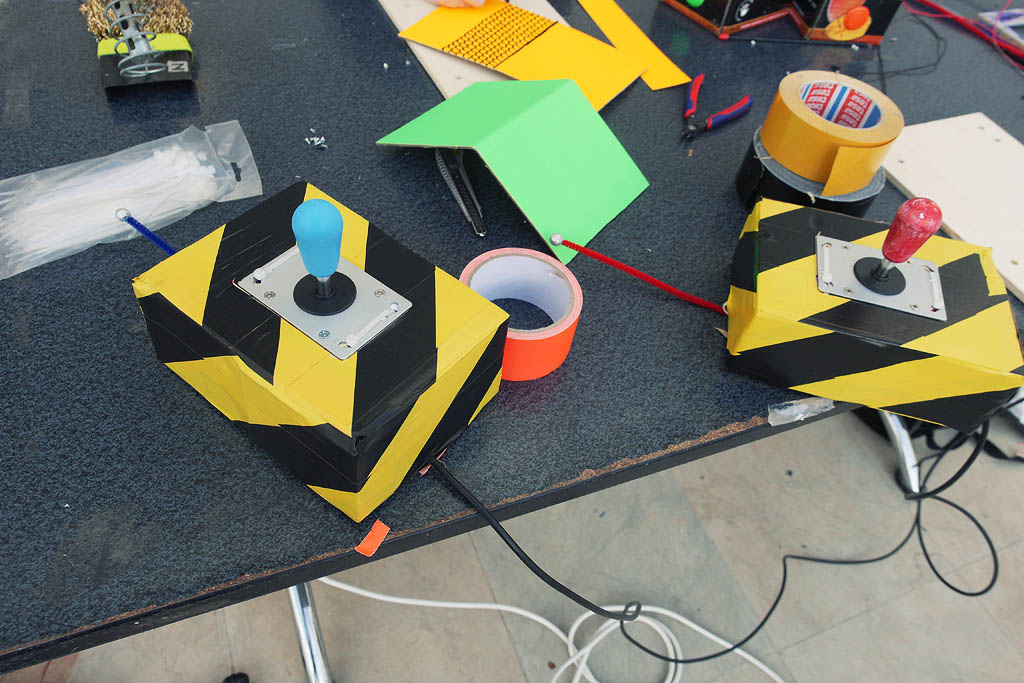 Additionally, I built a soap bubble machine, which was purely for decoration, as well as a countdown display with blue beacon on top. The countdown limited the duration of each game to five minutes. When the countdown was finished, the machine popped a white balloon with a needle that was attached to a RC servo, indicating that the game had ended. The audience loved the game and it became quite a hit during the Efest. Unfortunately, I could not take the game back to Germany afterwards, as it was simply too big. However, I decided to re-build an improved version of it in Berlin, since the plan was to present the attractions made in Tunis also in Paris in February 2018.

The countdown machine (without balloon) at the alternative indoor arena, where we played when it was raining 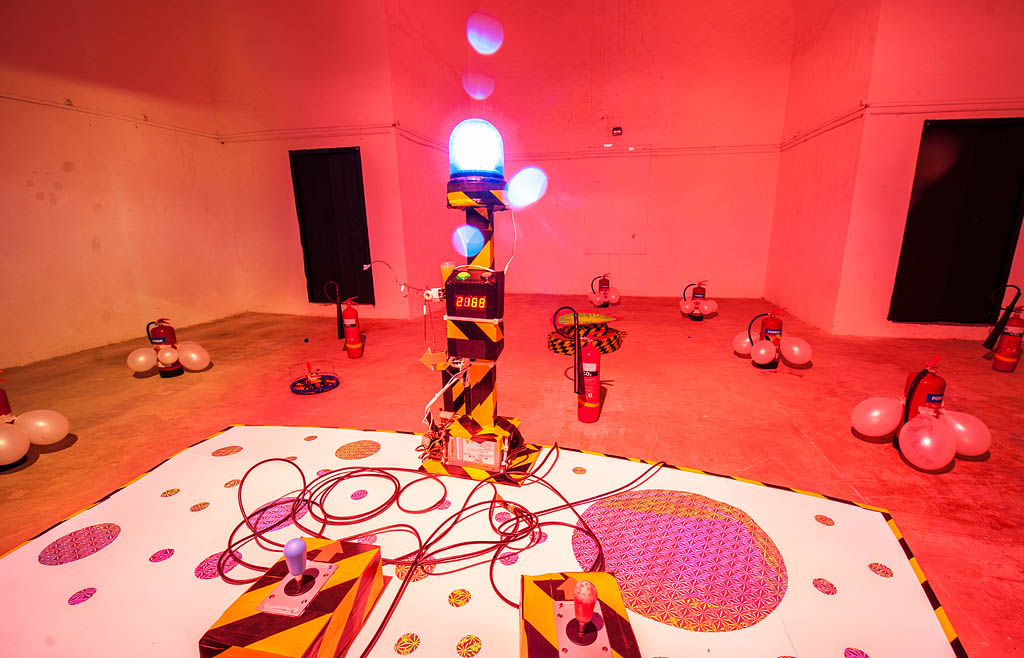 For the second version of the game, I decided to 3D print the vehicles instead of modifying remote controlled toy cars. In this version, two wheels on the left and right side of the chassis are individually driven by DC gear motors. Each vehicle has additionally a third swiveling wheel in the front to stabilize the platforms. By placing the drive wheels side by side, the vehicles can rotate on the spot, which solves the steering problem of the first version. The big arrow at the front of each car holds a syringe needle and is mechanically connected to the swiveling wheel. Thus, the arrow always turns in the driving direction of the vehicle.

The second version vehicles were mainly 3D-printed, surrounded by a platform which was cut out of Forex board

The electronics are just a bunch of modules thrown together: A 433MHz receiver module and dual H-bridge motor driver board connected to an Arduino Nano. The microcontroller interprets the radio signals and controls the two DC motors accordingly via the motor driver board. The vehicle is powered by a 10.8V lithium-ion DeWalt cordless drill battery. In order to protect the battery, the microcontroller monitors the voltage via a voltage divider and colored LED’s indicate the state of the charge. In case the voltage drops too low, the vehicle is switched off in order to protect the battery.

Schematics of one vehicle

I thought that big, transparent trackballs would be cool for controlling the game, as their round shape fits well to the overall theme of bubbles. I also thought that it would add a fun, sporty aspect to the game, if the players have to move the trackball really fast when they want their vehicle to move swiftly. 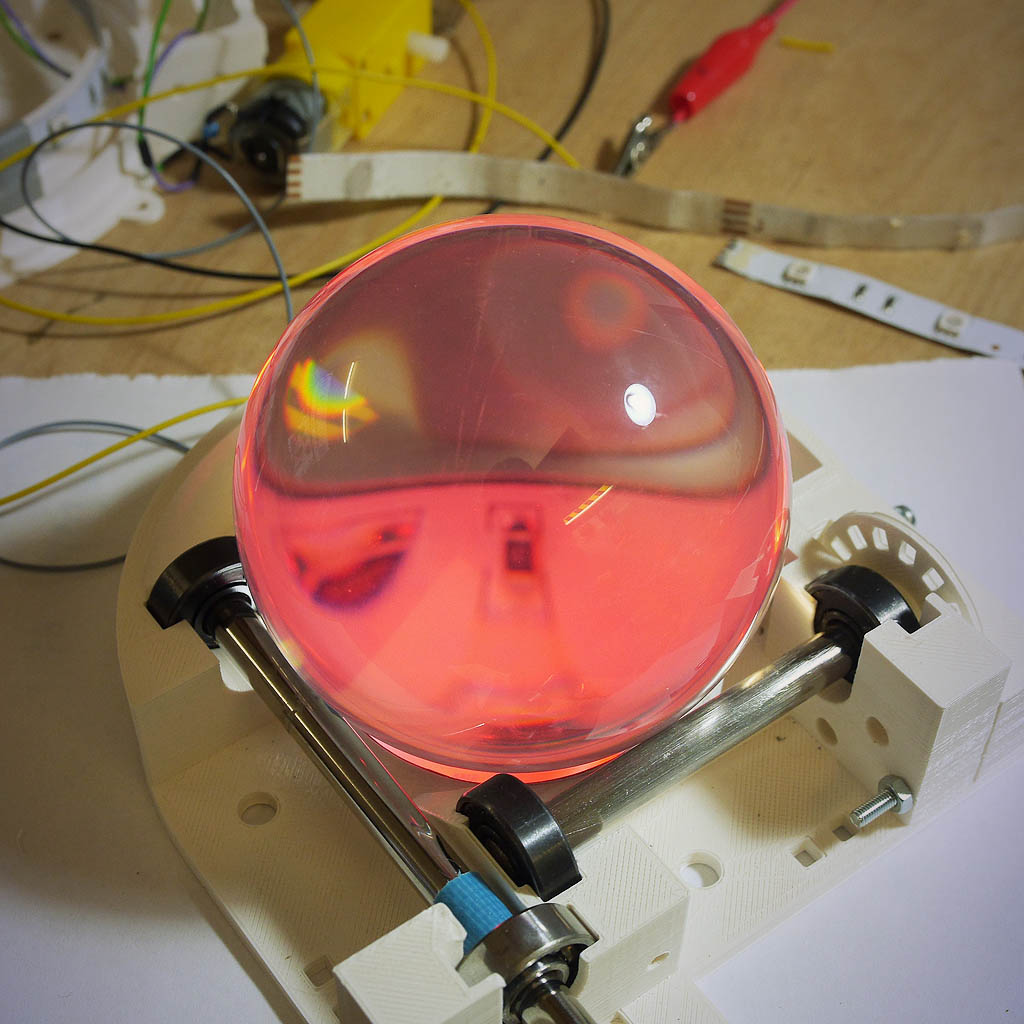 After a bit of research, I discovered the existence of contact juggling balls, which are transparent acrylic balls and available in a wide range of sizes. They were perfect for my purposes. I designed a 3D-printed frame for the trackballs in Sketchup - you can find all the 3D files below, if you are into building your own big transparent trackball. The whole trackball system was placed inside a portable, wooden box which also left enough space inside to transport additional stuff, like hundreds of balloons.

The trackballs inside the wooden box

The electronics of the control unit are pretty simple. There are two track balls, one for each player, and each trackball contains two rotary encoders, one for x- and one for y-direction. An Arduino Nano reads the encoders’ outputs and sends directional information to the corresponding vehicle via a 433MHz transmitter. The protocol is just two bytes long, one byte per car/player. The byte for one car is split into two 4-bit nibbles, with one nibble containing the x-movement and the other nibble containing the y-movement.

Schematics of the control unit - please note that you might have to use different resistor values than 30K for the encoders, depending on the brightness of your LED's

For decorating the playfield at the show in Paris, I also brought some barbed wire with me that I could attach to the various obstacles and barriers on and around the playfield. This added some challenge to the game, since barbed wire poses a serious threat to inflated balloons! I also bought a blue, rotating beacon and I built another soap bubble machine, which would both turn on while the game is running. The bubble machine was also 3D printed and you can find the design files below, in case you need one for your next party.

The Bubble Blast arena in Paris 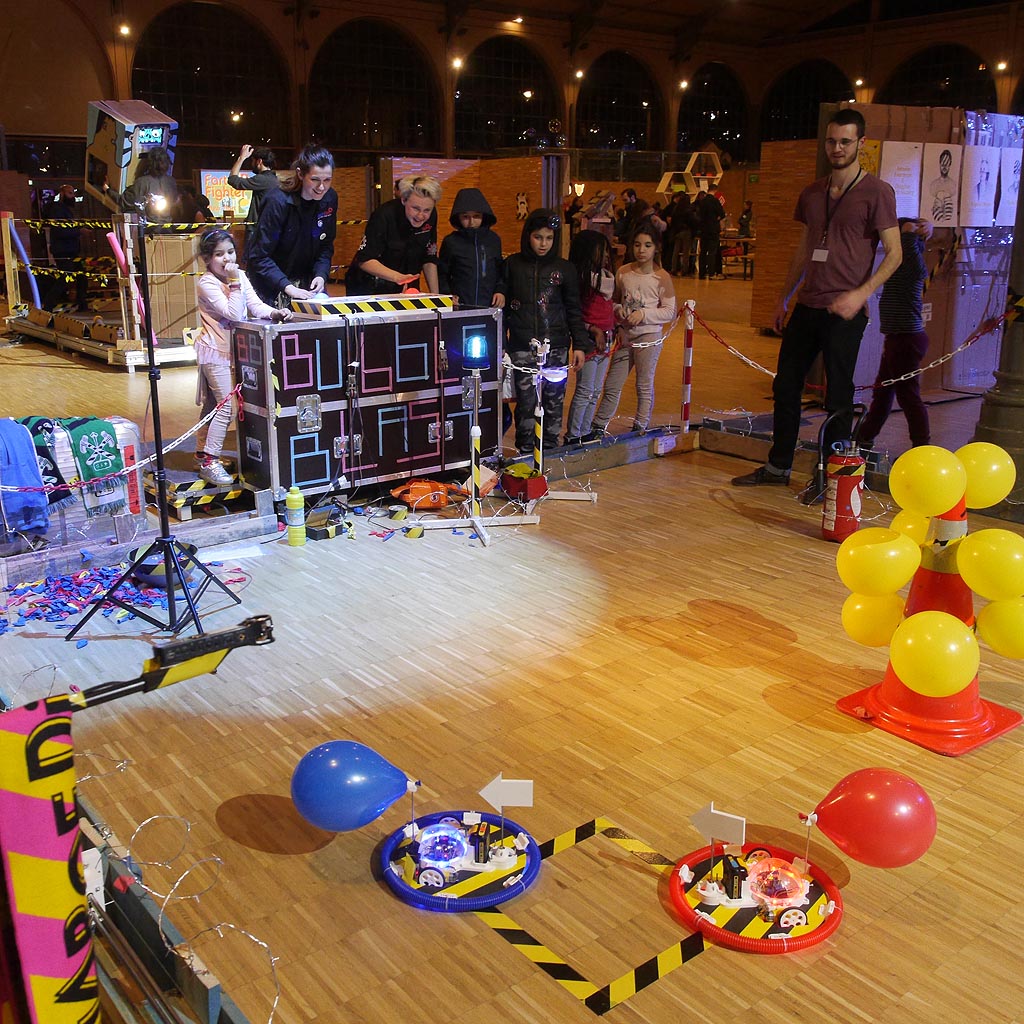 The bubble machine machines a bubble 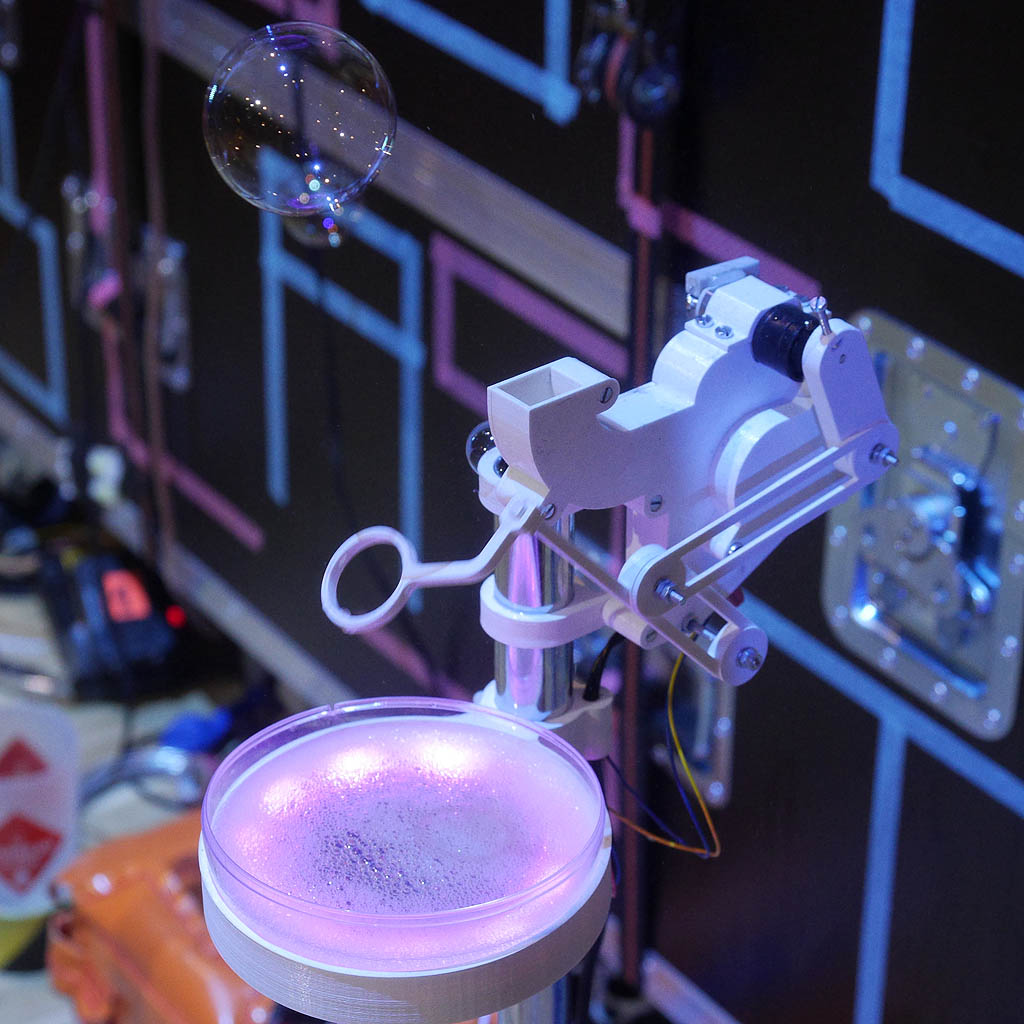 Kids were enjoying the soap bubbles a lot

Big thanks go to the amazing Antonin Fourneau for inviting me to Eniarof in Tunis, and many thanks also to the whole Efest team, in particular to the wonderful director and founder Afif Riahi and to Skander Sabbah for organizing everything so superb. Working in Tunis was an overall absolutely exciting experience!

Materials for one vehicle

Materials for the bubble machine