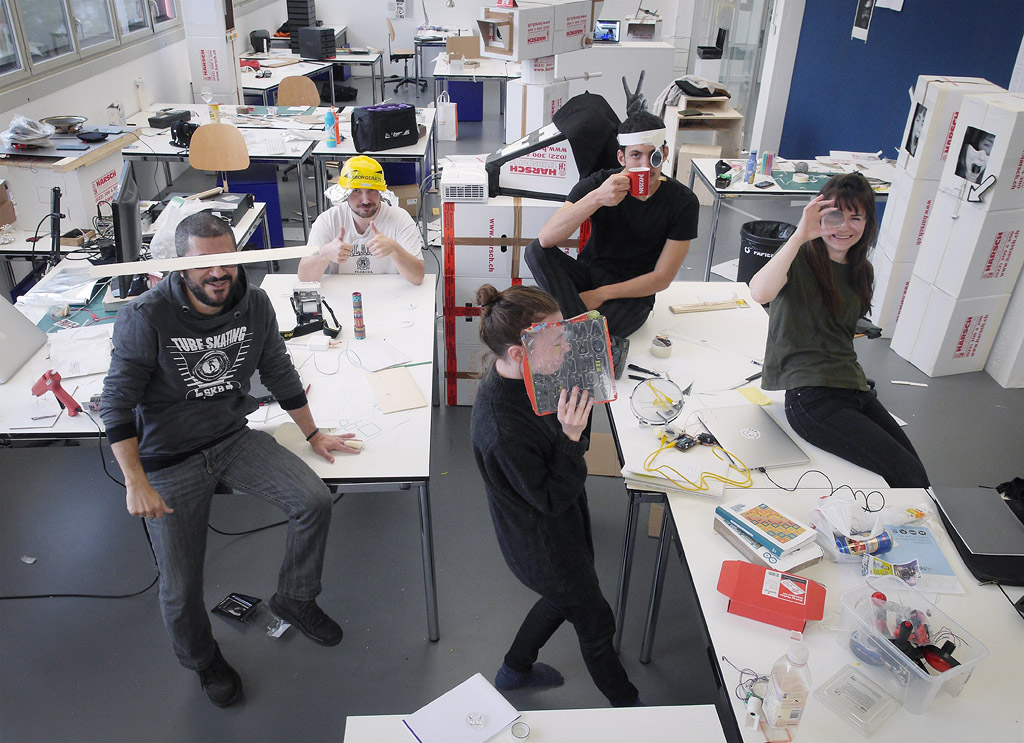 In 2018 I gave a little workshop at HEAD, in which we challenged the selfie culture by developing our own "Advanced Selfie Machines. At the end of the workshop, we presented the outcomes in a small but delightful exhibition. Here are the student's works and also some quick builds that I made during the workshop:

Inspired by cardboard pop-up mechanisms, Salomé built two boxes with photos of herself inside. The portraits can be manipulated by pulling on a string or turning a wheel.

Am I rather an artist or a designer? This question is a big one amongst the students of an art and design school. Yassine trained a machine learning algorithm on photos of artists and designers in order to build a tool that can tell you with computational precision in which category you fall, based on your visual appearance.

Mirror of the Soul

Francois made a mask that you wear on your eyes when taking a selfie. It renders you invisible by hiding your eyes, the mirrors of your soul. It replaces them with a reflection of the person / the surrounding in front of you.

Francois made another mask that you wear when taking a selfie. This one uses a bunch of fresnel lenses which render you invisible by distorting your portrait and by reflecting the surroundings.

Carla and Romain developed a "smart machine" that aims to translate a webcam image into sounds.

Core of this exhibit is a salvaged a dichroic prism from a broken video projector. I mounted it in the center of a cardboard box and surrounded it by three black and white pictures, which are prints of the cyan, magenta and yellow channel of a portrait of mine. Those images are attached to the sides and the back of the box. Due to optical magic, the prism assembles those three photos back into a color photo, if you look straight into its front.

This camera obscura is made with a large magnifying glass and a sheet of tracing paper. You can move the projection surface back and forth by rotating the focus knobs. Place your smartphone inside the ULTRA BOKEH 2000 and record videos or shoot photos with an incredibly low depth of field!

There's another experiment, which I made during the workshop and which I've documented on a separate site, because I wanted to explain more of its background. It is the "Flying Pixel Portrait Cammera" and you can find it here.

The source photos for all the animated GIFs on this site are © HEAD ‑ Genève, Raphaelle Mueller.

Thanks to Alexia Mathieu and the whole team of HEAD – the school of Art and Design in Geneva - for the nice time in Switzerland and for inviting me to give this workshop!